I’m honored to be part of a team of bloggers writing on behalf of Shama Women, which operates training centers in South Asia where women learn sewing, cosmetology, literacy, and theology. Their stories are evidence of God at work in a country where there is open hostility toward Christians and the lives of women are marginalized. “Shama” means candle—these women are shining light into a dark place.

Maria is 20 years old. She is one of 10 siblings, with five brothers and four sisters. Years ago, when she was still very much a child in the eyes of the world, her mother passed away, followed by her father just a year later. In her culture, when there is no father or grandfather, the eldest brother in a family becomes the caretaker for any of his unmarried sisters. With both of her parents gone and no family patriarch left, this became Maria’s story.

Though her eldest brother took her in and provided a roof over her head, Maria was still expected to earn her keep, so she began cleaning homes. Her wages were low, there was little promise of ever getting a raise, and she felt uneasy and unsafe. Her brother was the recipient of nearly all of her meager earnings.

As young women in her country do, Maria had been collecting for herself a dowry to be given to her future husband. She didn’t have much to offer, the most valuable and treasured piece a tea set given to her by her mother. 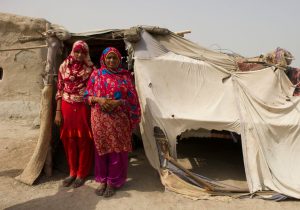 Just a tea set. It doesn’t sound like anything of importance. As I sit here and type, the shelves above my desk hold a variety of tea pots and cups and saucers, sets I’ve collected from here and there: white china with colorful flowers from my wedding, a brightly colored set given by my sister as a Christmas gift, several delicately painted, flowered pieces handed down from the women in my husband’s family, a tiny set meant for children’s play. They’re all special to me, but none carry anything close to the value and cultural significance of Maria’s. No, Maria’s tea set was much more than an heirloom. It was all she had to her name.