Well, I have now managed to lose both of my children in public places.

20 months or so seems to be the magical age when this happens. With my older daughter, we were in a Carter’s clothing store and while I rummaged in the diaper bag for my debit card at the checkout counter, she stealthily slipped off. When I couldn’t spot her, the employees closed the store entrance until she was found, sitting happily on the floor behind a shoe display, trying on shoes (why didn’t I think to look there first, knowing her fondness for dress-up?). She looked up with a smile and lifted her foot in the air in a proud display, oblivious to the tension of the moments leading up to her discovery. She was missing for less than a minute, but my fear in that minute was real. The front doors had been open thanks to an unusually cool spring day in Florida, and my heart plummeted imagining what could have happened if she’d been bound for the exit—straight into a busy parking lot—instead of to try on footwear.

Last week at an indoor theme park, my younger daughter pulled a disappearing act of her own, on a slightly larger scale. This one is fast and sneaky, and we’ve known that about her since she started walking. (A few months ago she ran away from me in Publix and hid in the frozen foods aisle behind a stock crate. I caught her when she peeked around it and giggled at the look of frustration on my face. Oh, the gray hairs!) But this time, in a large space thick with short people (aka kids), she really scared me. She was standing right next to me, I looked up from her to her sister, who was asking for help tying shoes, and then I looked back, and she was gone.

I whirled around in a circle, scanning the room, which suddenly felt way too big with way too many places for a tiny person to hide. My friend and I instructed our older kids not to move and quickly split into opposite directions to look, but my girl was nowhere to be seen. My friend grabbed an employee who began asking me to describe my daughter. What was she wearing? How tall is she? What’s her name? Is she walking? (Um, no, she crawled away at light speed.) I stumbled through my description of her (“She’s really small! She has short brown hair and big brown eyes… She’s just really small!”), my mind racing.

I’m not the mom who loses her kid at a place like this. I’m the mom who knows where my children are and what they’re doing at all times! … right?

She was gone for maybe five minutes, which doesn’t seem long but is way, way, way too long. And then there she was, tears rolling down her face, in the arms of a young employee who’d had her wits about her enough to think like a toddler and climb way up into the big kids’ gym. Of course that’s where she was. My monkey. I hugged that girl so tight and tried to fight the tears and reset my fried nerves.

I tell this story because

1) It embarrasses me, but I know I’m not alone. I know this because when I posted a photo later that day on Instagram and mentioned her brief disappearance, three or four friends chimed in to commiserate (one of them was my own mom). I want to be forthcoming about my parenting failures because maybe you need to know you’re not alone. Sometimes friends compliment my parenting and I laugh before I realize they’re being serious. I am not a perfect mom—far, far from it—and that’s ok. My kids will grow up knowing that their mom makes mistakes and isn’t afraid to own up to them. Believe me, they’re already quite aware.

And 2) In those brief minutes last Wednesday when my baby was nowhere to be seen, and even that day at Carter’s so many years ago with her big sis, I caught the tiniest glimpse of how our Father feels about us when we wander off.

What man of you, having a hundred sheep, if he has lost one of them, does not leave the ninety-nine in the open country, and go after the one that is lost, until he finds it? And when he has found it, he lays it on his shoulders, rejoicing. And when he comes home, he calls together his friends and his neighbors, saying to them, “Rejoice with me, for I have found my sheep that was lost.” Just so, I tell you, there will be more joy in heaven over one sinner who repents than over ninety-nine righteous persons who need no repentance. —Luke 15:4-7

He is the shepherd, searching relentlessly until the one sheep is found.

He is the father of the Prodigal, waiting expectantly and scouring the horizon for the sight of his son returning.

He is the woman who dropped one of her 10 coins—a day’s worth of income—holding a lantern in her dark home and sweeping the floor in search of it, calling friends and neighbors to celebrate when it is recovered.

I wasn’t panicked. I knew that the one I loved was there somewhere. She wasn’t lost, not forever. But how I longed for her! I knew she was alone and afraid. I wanted more than anything to have her safely back in my arms, but the realization dawned on me that it was not for my own sake or my own comfort. It was for hers. Because I love her more than I love myself and could not bear to think of her suffering alone when I was right there with arms flung wide, ready to hold her and wipe her tears away.

Because despite my daughter’s moments of reckless bravery and independence, she needs me.

Call it a parenting fail, but I’m grateful to God for reminding me of His relentless love for us and the truth that no matter how confident and independent I might feel, I need Him.

Now. Where does one buy a leash for a toddler? 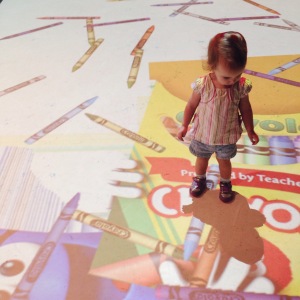 3 thoughts on “Lost and found”